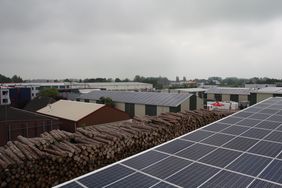 Bad Staffelstein / Germany, June 09, 2016 – IBC SOLAR AG, a global leader in photovoltaic (PV) systems and energy storage, has delivered its biggest rooftop system for solar self-consumption to date. The 2.4 megawatts (MW) were delivered to the province of Gelderland by the Dutch regional company IBC SOLAR B.V, and officially grid-connected on June 3rd. Approximately 75 percent of the green power produced is used for self-consumption, with the rest being fed into the public grid.

The local IBC SOLAR partner company Xperal was in charge of the installation. Altogether, there were 9,240 modules installed on the rooftops of Plospan, a wood processing company in Waardenburg. With this many modules, the system is now the biggest PV installation in the province of Gelderland.

The green idea fits Plospan’s values: the family-run business, currently managed by the family’s fourth generation, recycles wood residues into environmentally friendly pellets and bedding, for example for horses, small domestic animals and pets. The use of solar power for self-consumption is part of the consequent sustainability strategy which helps Plospan to save money. The company made up of 70 employees is using the power for its production facility, where it is now supplying machines at the plant as well as its logistics with environmentally-friendly energy. As a result, electricity costs have been significantly reduced, meaning a return on the investment in the PV system should occur within ten years. The PV system produces 25 percent more energy than the company consumes, so the surplus is being fed into the public grid. With this amount of energy, 145 households are able to be supplied with energy for one year.

IBC SOLAR will once again be showcasing its products at this year’s Intersolar Europe, Europe’s most important trade fair for solar technology. The company from Bad Staffelstein will be presenting its entire product range in hall A3, stand 290, from June 22nd to 24th. In addition to new products, the photovoltaic specialist will also inform on its current photovoltaics projects around the world along with its expertise and services for new PV business models.