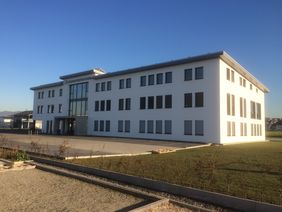 Bad Staffelstein, 10 January 2017 – ADSOBA GmbH, Premium Partner of IBC SOLAR AG, installed a photovoltaic (PV) system on the roof of a newly constructed health centre in Hohberg (Baden-Württemberg) with a total output of 100 kWp. The generated solar power is predominantly used by the tenants for their self-consumption.

The property is heated with heat pumps and two buffer storage systems in the winter and air-conditioned in the summer using solar energy. The power generated by the IBC PolySol 260 ZX solar modules is also offered to the tenants for self-consumption and is additionally used to supply the charging poles installed at the building for electric vehicles. Excess power is fed into the public grid.

It is not obligatory to purchase the solar power for the eight rental units including a pharmacy, a joint practice and a dental practice. However, producing your own energy results in significant cost benefits compared to purchasing it from the public sector. The cost price is around 10 ct/kWh, while the purchasing price amounts to 24 ct/kWh. The use of in-house produced solar power therefore generates an additional return and reduces additional costs from which the tenants and landlords benefit.

The creation of the PV system, which generates around 100,000 kWh of power a year, was instrumental in classifying the building in accordance with the KfW 55 standard. This resulted in a repayment bonus of five percent from vehicle financing which exceeded the investment costs of the PV system in volume and therefore completely financed said system.

The owner of the health centre, Simon Assmus GmbH, invested around 130,000 euros in the PV system which is part of an exemplary overall energy concept. The property therefore has full heat insulation and thanks to the PV system, heat pumps and controlled ventilation was designed as an energy-plus house.