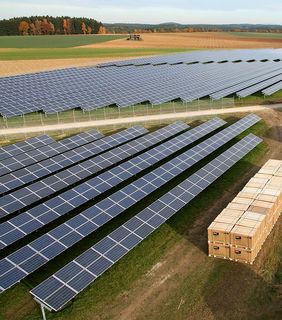 Bad Staffelstein, November 8, 2016 – IBC SOLAR AG, a global leader in photovoltaic (PV) systems and energy storage, currently has eight projects under construction resulting from bids on nationwide tenders for ground-mounted solar parks. The projects include IBC SOLAR’s own projects as well as several customer EPC orders. Subsidy applications will be made for all of the systems before the end of the year, so that the projects can be realized within the 18-month deduction-free grace period.

The list of projects also includes the 10-megawatt “Solarpark Seßlach” in Upper Franconia’s Coburg district. This so-called “farmland in a disadvantaged area” was transformed into a ground-mounted solar park within just seven months and will be connected to the public grid in November this year. The 17-hectare plant is located in the vicinity of the existing transformer station – an ideal location for generating solar energy at very affordable prices and feeding it directly into the transmission network.
IBC SOLAR already had two tenders accepted in the first round, which took place on April 15, 2015. These two systems will be connected to the grid on schedule as well.

IBC SOLAR plans to construct several ground-mounted plants around Germany in 2017. Bidding rounds in 2016 have already resulted in the company receiving two tender acceptances from the Federal Network Agency for a total capacity of 20 megawatts. The sixth round of public tenders is currently in process and comprises a volume of 160 megawatts. In October, the Federal Network Agency in cooperation with Denmark also began requesting bids on an additional 50-megawatt transnational tender. IBC SOLAR submitted bids on a total of five projects for these two tenders.

“We are very pleased with these positive developments in the project business, and especially with the newly added cross-border tender,” said Oliver Partheymüller, Head of Project Development and EPC Germany. “Generally speaking, tender procedures in Germany still involve quantities that are far too low and will not lead to the government’s desired expansion corridor of 2.5GW per year. Germany still has a lot of untapped solar energy potential,” added Partheymüller.

IBC SOLAR has more than thirty years of experience in planning, constructing, and operating large-scale solar projects. In addition to over 50 civic solar parks, which it has completed on its own, IBC SOLAR further works as a general contractor for municipalities, public utilities companies and private investors. As a service provider, the company offers project developers and investors optimised cost structures, maximum quality, and punctual project completion.