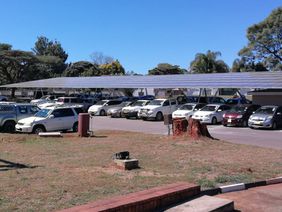 Harare / Zimbabwe, November 22, 2018 – IBC SOLAR South Africa, subsidiary of the German system provider for photovoltaics (PV) and energy storage, has commissioned a 194 kilowatt peak system with battery storage in Harare, the capital of Zimbabwe. The flagship project was ordered by the Standard Association of Zimbabwe (SAZ), that will be using the PV system to provide an uninterrupted, environmentally friendly power supply to its central administration building.

The project, installed in early summer 2018, allows the Standard Association of Zimbabwe, a non-profit organisation, to supply its own energy needs through solar power. The photovoltaic system has a nominal capacity of 194 kilowatts peak (kWp) and is connected to a battery storage unit with a usable capacity of 200 kilowatt-hours (kWh). Approximately 720 IBC PolySol 270 Wp polycrystalline solar modules will be producing around 300,000 kWh of solar energy per year, which is calculated to meet 75 percent of the building’s energy needs. The additional battery storage unit will ensure that the SAZ administrative building can access power even in the event of a blackout or in times of low solar irradiation. The system will save 270 tonnes of CO2 annually, helping protect the climate and the environment.

The PV plant was planned and installed as a collaborative project between Cool Solar, an IBC SOLAR Premium Partner based in Harare, and RED Engineering from neighbouring South Africa. Technical experts with IBC SOLAR Germany and South Africa contributed additional technical support. Rather than putting solar modules on the roof of the SAZ building, the PV professionals chose to construct two carports in the staff parking area and installing the modules there. The new system significantly improves SAZ’s energy supply security— computers, printers, lights, air conditioners and refrigeration units now have a reliable source of energy and can be disconnected from the unstable public power grid and protected against grid power surges.

Energy shortages are a massive problem in Zimbabwe, multiple outages per day are a common occurrence. Most of the country’s power is generated by burning wood and coal, with renewable energies playing only a minor role — solar power represents a mere one percent of Zimbabwe’s energy supply. Considering how much sun the country enjoys, it seems logical to expand the usage of photovoltaics there as much as possible, in order to electrify remote areas and help stabilise power supplies in urban agglomeration. Feeding solar power into the poorly developed public power grid is not permitted, so self-consumption systems would be the method of choice. The government is indirectly promoting solar energy’s expansion by exempting imported PV components from customs duties.